May The Furce Be With You 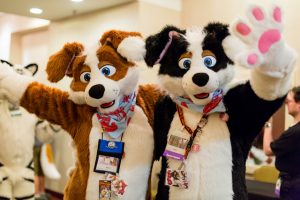 Furries at a convention. (Images courtesy of Martin Grondin via flickr.)

This fandom isn’t quite like any of the otters…

Families who saw Disney’s Zootopia during its opening weekend might’ve found themselves in a packed menagerie. Theatres across the U.S. were stuffed with packs of dogs, wolves and foxes. And yet no one heard even a whine from them. No stories of frantic movie theatre employees calling animal control. How did these animals break in? The presence of these creatures was no mere prank. These packs were made up of humans in complex animal costumes. This pack has a name: the furry fandom.

What is a furry?

Yes, animals can be furry. But can humans be furry? The answer: yes.

Most furries would agree with Plante’s definition regarding anthropomorphic, or “anthro” characters—animals who have human-like characteristics. Mickey Mouse and Bugs Bunny: anthros. But self-identification is up for debate—depending on who you ask.

“I think it’s a hard term to classify as either a fandom or a culture, because the furry community is actually multiple fandoms collectively,” said Sam, a 23-year-old tumblr blogger, artist and furry. Some of these fandoms might include fans of Brian Jacques’s Redwall book series, Watership Down or even My Little Pony. This might mean that a brony—a male fan of My Little Pony—could also be classified as a furry, depending on the definition.

“Her name is Krow*,” 20-year-old student Ash* says, referring to the cold bespectacled fox who is her Skype profile icon and her fursona—a portmanteau of the words “persona” and “furry.”

Fursonas are like the alter ego of a superhero. The person behind the mask—er, fursuit—is the average human. But it’s much more than a mask—the fursona is a huge part of a furry’s identity.

“We’re finding a psychological perspective because a lot of furries create idealized versions of themselves,” Plante says. “If you’re going to be yourself, you might as well be a better version of yourself.”

Plante’s words ring true for Ash’s fursona. Krow began as an original character. As Ash grew up and changed, so did Krow. Ash used Krow her to represent herself online. But Krow is not Ash.

“She’s a lot more bold and brave,” Ash says. “She’s a little bit mean—I’m not very mean at all. She’s kind of like an opposite of me. But we share some things. She has good leadership skills—and I, in the past, have been praised for my leadership skills. She’s also super gay, and so am I.”

Sam also has a fursona, but hers isn’t a known species. “I made her a large cat body type, but with the colors and markings somewhat designed from a mocking bird and with the horns of a ram.”

Certain parts of Sam’s fursona come from things she values. “My family has always loved mockingbirds, and my family is important,” Sam explains. The ram horns come from her husband—an Aries—so that was a shout-out to him. “It also hints at stubbornness.”

“I actually don’t have a fursona,” 21-year-old blogger Cameron Baggs says. Baggs just wasn’t interested in fursonas. Instead, he preferred creating characters and stories that didn’t involve him. But he doesn’t put people who have fursonas down. In fact, he praises them.

“I think it’s a way for them to express themselves in unique ways,” he says. “It’s also a way for them to interact with the fandom if they don’t have any particular artistic skill. Many furry artists find themselves getting the most financial benefit from people commissioning them to draw their fursonas.”

Some furries go out and dress as their fursona in what’s called a “fursuit.” (Think college sports mascot.) But fursuits don’t come cheap.

Just ask Ash. She recently purchased a fursuit for roughly $1,200. All that money for a head, paws, arms and a tail. Not quite a full fursuit—no body or legs—but she’s proud of her purchase.

Hey, ’90s and’ 00s kids: do you remember crushing on Kovu from The Lion King 2? Admit it: there was something charming about the lion who was meant to follow in Scar’s pawprints. But some people don’t get over that crush. Sometimes it can become a lot more than just a crush. It can get hot and heavy over time.

While Rule 34 applies to all fandoms, it doesn’t apply to all furries in the fandom.

“I promise I am not wearing my hundred dollar fursuit to go suck dick in a back alley,” says Ash. “I promise, that’s not what this is for.” But she notes that there are certainly fetishes within the furry community. Some furries dress up as “babyfurs,” which are essentially cute little cubs or puppies. But they’re definitely not her kink.

Initially he didn’t understand the draw towards animal erotica, but he understands it now through another lens: sexual orientation.

“I’m gay, and what helped me come to understand my own sexuality was seeing how open and expressive other queer furries in the fandom were,” Baggs said. “I think that’s what attracts so many queer people to the fandom—that level of expression.”

The furry fandom is located in roughly three places: the outer fringes of society, furry conventions and the Internet. Most prefer the latter to keep out of the view of the public. Thanks to certain sects of the fandom (see above), that’s understandable. But that isn’t to say that there are only negative aspects. In fact, there seems to be far more good than bad.

“This fandom is home to a lot of people with mental illnesses, victims of abuse, not to mention those of the LGBTQA+ community often find shelter in a fandom that seems to be pretty much 75 percent not straight folk,” Sam says. “It’s easy to ostracize people who are already ostracized.”

Which is one reason the furry community is so accepting. “A lot of them have a history of being bullied—almost 70 percent of furries experience bullying in their life—and they’re kind of on the fringe in terms of their interests,” Plante says. Since so many have been picked on, it makes it difficult to push people with similar experiences around. But about about the other 30 percent?

Shared interests, perhaps? The art style is what Baggs thinks brings furries together. “We’re all here because we like an aesthetic, not some particular intellectual property, so there’s no gatekeeping within the fandom that dictates what a true furry is or isn’t.”

This lack of gatekeeping keeps the furry fandom very open and supportive for its members. But gatekeeping still exists. (Note the word “lack.”) According to Plante’s study, most furries are male. But he found a surprising exception.

“The one place you do find a reversal of that trend is among artists in the fandom,” Plante says. “It’s actually a complete 180. There are far more women in the fandom than there are men.”

He compares this to the STEM field and the arts. Men tend to gravitate more towards STEM. Women see more men and might feel they’re in the wrong field. Off to the arts from there.

“I’m a successful artist because of the furry fandom,” Sam says. It’s what got her into art school and paid her student loans. So she’s more than happy to commission other furry artists when she can—and attend the occasional convention.

The Pros of Cons

Ash wore her furry convention shirt to her classes earlier that day. No one said anything until a Greenpeace worker had asked her about it. “It’s for a furry convention,” she’d said to him.

“Ma’am, when I was a pizza guy, I used to deliver to those conventions!” the Greenpeace worker had exclaimed. He didn’t have anything negative to say, much to Ash’s relief.

Fan conventions are a place of fun, but for the uninitiated, fandom cons are just plain weird. These aren’t business conferences. There are no suits and ties. No sitting around a table discussing marketing tactics. Fans attend panels—like a Q&A with a famous animator—in crazy costumes.

“As far as panels go, I have been to everything from ‘Fursuiting 101’ to ‘How to Raise Pygmy Goats,’” Ash says. She goes to conventions and hits up the dealers’ room. There, furry artists sell their works, which can be anything from books, comics or art commissions. As just about any freelancing artist can tell you, commissions are huge. They save “starving artists” from dying of hunger.

Ash’s also sure to participate in the fursuit parade—an event in which furries don their costumes and prance around the convention center to show off their fursuits.

Cons aren’t just about having fun. They’re also about engaging with the surrounding community. Anthrocon, the world’s largest furry convention, has raised over $240,000 in all since 1997. In 2015 alone, Anthrocon convention attendees donated $35,910 to the Western Pennsylvania Humane Society. Compared to its humble beginnings in 1997 with a donation of $2,200 for therapy dogs, that’s an exponential increase within nearly 20 years.

For the most part, furries seem like a caring and open group of fans, filled with passionate people who adore animals and creativity. Although people outside of the fandom might be judgmental towards furries, the furries don’t let it get to them. They shake it off like a dog fresh out of the bath and stick together through thick and thin.

“People can treat me differently if they want,” Sam says. “but for every one of them is ten supportive furries.”

All of them with their tails tags wagging.